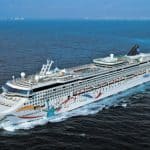 Does anyone have jumper cables? I am sure someone made the comment after the power shut down on the “Norwegian Dawn” on Friday.

Check out this article I came across on the AP wire this morning.

MIAMI- The Norwegian Dawn cruise ship temporarily lost power off the coast of Puerto Rico and was heading to the island for maintenance. A Norwegian Cruise Line news release says the ship lost power at 9 a.m. Friday about 95 miles north of San Juan. The U.S. Coast Guard was notified. Partial power was restored, and the ship was diverted to San Juan, where it was expected to arrive under its own power Saturday morning. The cruise line says it will help passengers make travel arrangements to Miami, where the ship was supposed to arrive Sunday.

Norwegian says it will provide each guest with a 75 percent refund and a 50 percent future cruise credit, which will be good through the end of 2010.