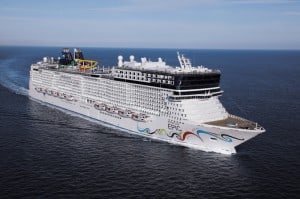 Norwegian Cruise Line is raising a glass to Norwegian Epic’s recognition as “Best Overall Individual Cruise Ship” in Travel Weekly’s 2011 Readers Choice Awards, one of the most prestigious awards in the travel industry. Norwegian Epic, the line’s newest and most innovative ship, was selected by readers for offering a product and service that excelled and stood out as the industry’s best.  To celebrate, guests who book a cruise on Norwegian Epic between January 29, 2012 and February 5, 2012 will receive a complimentary bottle of sparkling wine in their stateroom upon embarkation.

Through April 7, 2012, Norwegian Epic is sailing seven-day voyages to the Eastern Caribbean from Miami with stops in Philipsburg, St. Maarten; St. Thomas, US Virgin Islands; and Nassau, Bahamas, along with three relaxing days at sea. On April 14, 2012, Norwegian Epic embarks on an 11-day Transatlantic cruise from Miami to Barcelona with a stop in Ponta Delgada, Azores. From April 29 through October 14, 2012, the ship sails seven-day Western Mediterranean cruises from Barcelona, Spain.  Ports of call include: Naples, Rome (Civitavecchia) and Florence/Pisa (Livorno), Italy; Cannes and Provence (Marseille), France.

Norwegian Epic offers the ultimate in Freestyle Cruising with more than 20 dining options; the largest suite complex at sea: The Haven by Norwegian; award-winning staterooms for solo travelers; world-class entertainment featuring Blue Man Group, Legends in Concert, Nickelodeon and Cirque Dreams® and Dinner and much more.

Guests can take advantage of this special incentive in addition to the “Norwegians Take it to the Next Level” sales event, where new reservations made now through March 31, 2012, can receive same category upgrades, reduced deposits and e-coupons worth up to $400 in on-board savings for sailings taking place before December 31, 2012. With these coupons, guests can splurge on some of the most popular amenities at sea. Once booked and checked in online, guests will receive electronic coupons for spa treatments, internet minutes and a complimentary dinner in a specialty restaurant.