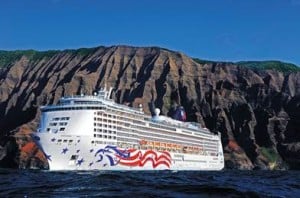 Norwegian Cruise Line today announced that based on strong demand for its Hawaii cruise, it will raise fares an average of 10 percent on Pride of America for new bookings beginning January 1, 2013.

The only large US-flagged cruise ship, Pride of America sails year-round from Honolulu on a spectacular seven-day inter-island Hawaii cruise, featuring close to 100 hours in port and overnights in both Maui and Kaua.

“Because she is US-flagged and crewed, Pride of America is in the unique position of being the only cruise ship that can sail to the four islands of Hawai`i from Honolulu without visiting a foreign port,” said Kevin Sheehan, Norwegian Cruise Line’s chief executive officer.  “As a result of this unique offering, there is strong, ongoing demand for the ship, propelled by record-breaking guest satisfaction scores.  This is a spectacular one-of-a-kind itinerary and the cruise delivers an incredible value for the money compared to the high cost of land-based vacations in Hawaii.”