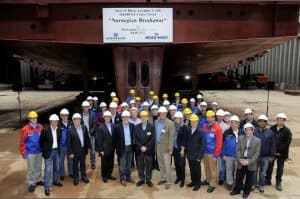 Norwegian Cruise Line executives were in attendance at Meyer Werft shipyard in Papenburg, Germany on Friday as the keel laying ceremony took place for the 4,000-passenger Norwegian Breakaway (photo right).

During the ceremony the first block of the ship was brought into the covered building where Norwegian Breakaway will be assembled (ships are pieced together like legos). In tradition, ceo of Norwegian Cruise Lines, Kevin Sheehan, laid the “lucky coin” under the keel before the 350-ton block was set into place.

The construction of Norwegian Breakaway is expected to be completed in less than 12-months.

“The anticipation is building for this incredible ship,” said Sheehan. “It’s thrilling to mark the start of the block assembly and realize that in one year we will take delivery of Norwegian Breakaway.  We can’t wait.”

The 4,000 passenger Norwegian Breakaway will arrive in her year-round homeport of New York City in early May 2013. The ship will begin weekly summer seven-day cruises to Bermuda on Sunday, May 12, 2013.  From October 2013 through April 2014, the ship will offer voyages from the heart of Manhattan to the Bahamas & Florida and the Southern Caribbean.