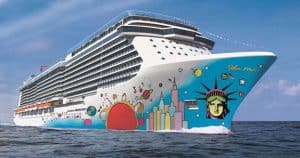 Norwegian Cruise Line revealed the hull of their upcoming Norwegian Breakaway today, designed by popular artist Peter Max. This is the first time Norwegian has commissioned such a well-known artist to paint the hull of one of their vessels, covering nearly 40,000 square feet of the hull.

“While it has been an honor to have my art exhibited in museums and galleries, I have also enjoyed creating giant ‘canvases’ for public view, including my 600 ft. Woodstock stage, a giant World’s Fair mural, the body of a Continental 777 super jet, and now, the hull of Norwegian Breakaway,” said Peter Max from his New York studio. “The artwork is a composite of New York City and cosmic imagery— the Statue of Liberty, the Manhattan skyline, a giant sunburst, planets, stars, and musical notes. That’s my New York! And now Norwegian Breakaway is my New York cruise ship ‘canvas.’”

“Norwegian Breakaway is New York’s ship and this colorful artwork by Peter Max will make the ship an instant icon,” said Kevin Sheehan, Norwegian Cruise Line’s chief executive officer.  “The Big Apple is known for its love of art and its many galleries – and now, Norwegian Breakaway becomes a floating piece of art that will cruise in and dock every Saturday on New York’s West Side.With this distinctive design, unlike anything else on the water, the ship will be recognizable to the millions of New Yorkers who will see her as she journeys up and down the Hudson River each week.”

Launching in June 2013, Norwegian Breakaway will be the largest ship to homeport year-round in New York City, offering Bermuda and Florida/Caribbean sailings.