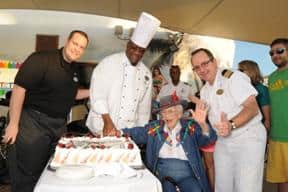 Fort Lauderdale resident celebrates her 100th birthday by cruising like a Norwegian.

Mrs. Holtz, originally from Queens, NY, now residing in Fort Lauderdale, FL, was sailing on board Norwegian Sky with her son, daughter-in-law and grandchildren. She was not expecting a birthday celebration on board, especially one as large as this. To help her commemorate her 100th birthday, Norwegian Sky’s more than 2,000 guests were invited to the pool deck for a special sail away party. There, they witnessed Master Ice Carver Ronaldo carve an enormous block of ice into a huge “100.” Then, Mrs. Holtz was brought on stage, presented with a birthday cake and saluted by her fellow guests, officers and crew who sang “Happy Birthday” in her honor.

This celebration came as a complete surprise to Mrs.Holtz and her family.  When asked to say a few words to the crowd, she stated that at no point in her life would she have expected to live up to 100 and wished everyone the same.  A former travel agent, Mrs. Holtz has traveled a great deal, and she closed her speech by saying she wished everyone could be sailing on their birthday, and if they do, it should only be on board Norwegian Cruise Line.

Following her pool deck celebration, Mrs. Holtz and her family were invited by the Captain, officers and crew to a special birthday dinner in Cagney’s Steakhouse. While dining, Mrs. Holtz thanked Jean-Michel Dhélin, Norwegian Sky’s hotel director, and told him that although she has travelled a lot in the past, Norwegian Sky and her crew provided the very best cruise experience she could recall to date!