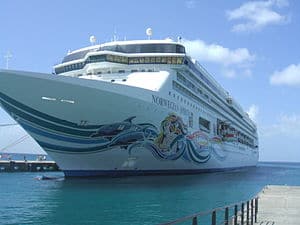 Norwegian Cruise Lines announced today that two of their ships will enter dry dock this fall to receive multi-million dollar enhancements.  The 2,018-passenger Norwegian Spirit enters first on a 13-day dry dock on September 25, 2011 in Mobile, Alabama. When the ship returns to New Orleans on October 9, 2011, she will sail a series of seven-day Western Caribbean itineraries.

According to a statement issued by the company, Norwegian Spirit’s refurbishments will include:

“While we have the youngest fleet in the industry, we still want to continuously enhance our ships,” said Kevin Sheehan, Norwegian Cruise Line’s chief executive officer. “With the dry docks of Norwegian Spirit and Norwegian Jade, we will have completed enhancements on four ships this year, a major investment for the company.”

The 2,224-passenger Norwegian Jade enters dry dock in Marseille, France on November 26, 2011 to December 8, 2011. During this time, the 2,402-passenger ship will receive the line’s signature Brazilian steakhouse, Moderno Churrascia, replacing Paniolo’s Tapas and Salsa restaurant on Deck 8. The ship will also receive technical enhancements including new propeller and thrust bearings; seals on the Azipod propulsion systems; as well as a new coat of hull paint.

After dry dock, Norwegian Jade, which sails year-round from Europe.