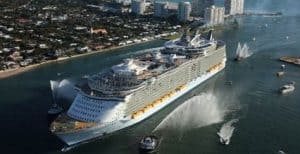 Royal Caribbean’s 5,400-passenger Oasis of the Seas rescued 23 Cubans last Wednesday when it was sailing from Falmouth, Jamaica to Cozumel, Mexico. A passenger noticed a small boat drifting carrying 19 men and four women, notified personnel on the ship and shortly after picked them up.

According to CNN, “Once the Cubans were on board, the Royal Caribbean crew gave them food, water and medical attention. A spokesman for the cruise line said none of the their injuries was serious, and the crew performed “basic medical treatment.”

The ship notified the Coast Guard and the Cubans were disembarked in Cozumel as instructed by authorities.

When should you purchase cruise travel insurance