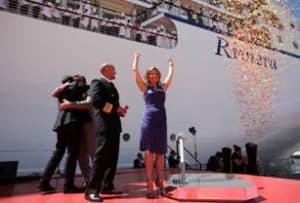 Oceania Cruises christened Riviera,the newest entry in the upper-premium cruise ship market, during an invitation-only, gala ceremony in Barcelona today. The ship’s godmother,Chef Cat Cora, the restaurateur, humanitarian, author, and co-host of Bravo’s new “Around the World in 80 Plates,” named the ship, joined by Deacon Ricardo Rodriguez-Martos of the Barcelona’s Apostleship of the Sea, who bestowed the traditional blessings.

The national anthems of the U.S.and Spain, together with a Catalan flamenco performance and a duet of “Barcelona” performed by Soprano AlinaFurman and Tenor Giorgio Olmo set a festive atmosphere for the ceremony.

Nearly 1,300 guests, including Xavier Trias, Mayor of Barcelona; Sixte Cambra, president of the Port of Barcelona and Jose Alberto Carbonell, director of the Port of Barcelona, were in attendance. Frank J. DelRio, the line’s founder and chairman, and Kunal S. Kamlani, the line’s president, presided over festivities that concluded with a15-liter Nebuchadnezzar of Champagne (weighing some 114 kilos), custom-made byVeuve Clicquot, commemoratively breaking against the ship’s hull.

“Today, thebaton as the world’s premiere ship has passed to Riviera,”said Del Rio.“When asked, I’ve repeatedly said that it was going to be hard to improve on Marina’s perfection, but I didn’t say it would be impossible. And we have done just that- improved on perfection.”

In thanking the invited guests, local hosts and dignitaries in attendance, Kamlani noted that Barcelona,a city renowned for its charm, diversity of cultures, art and design, was the ideal setting for the christening as, “Riviera is a work of art herself, and designed to bring the beauty of the world to our guests.” Barcelona also holds a special significance for Oceania Cruises as the line’s first ship, Regatta, was named in Barcelona in 2003.

Like Marina,her sister ship, Riviera alsofeatures a Bon Appétit Culinary Center, a Canyon Ranch SpaClub®, luxurious suites by Dakota Jackson, Ralph Lauren Home-furnished Owner’s Suites, and a grand Lalique staircase lit from above by a dazzling, custom-made chandelier.Her distinguishing features include a museum-worthy collection of fine art focusing on the works of some of Latin America’s most accomplished and admired contemporary artists and an Artist Loft with hands-on instruction.