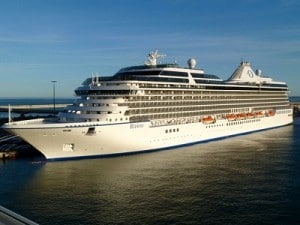 “We are thrilled to be recognized by the editors of Cruise Critic, particularly in these categories,” said Kunal S. Kamlani, the line’s president. “Extraordinary cuisine and luxurious accommodations have always been hallmarks of the Oceania Cruises experience.”

“Oceania Cruises does an exceptional job on its cuisine, whether it’s gourmet, grill or the buffet,” said Carolyn Spencer Brown, editor-in-chief of Cruise Critic. “While its new ships, Marina and Riviera, feature even more options, including Jacques Pépin’s namesake restaurant and Red Ginger, a contemporary Asian restaurant, its smaller ships also offer an array of new dishes on their Grand Dining Room menu.”

Cruise Critic editors also singled out Oceania Cruises for the second year in a row for its Owners’ Suites noting that they “are the most sumptuous at sea.”

“Bigger than some New York apartments,” Spencer Brown continued, “these feature furnishings from Ralph Lauren Home, a large living and dining room, bedroom with king-sized bed, his and hers walk-in closets, and even a media room with a professional entertainment system and a whirlpool on its wrap-around balcony.”

Serenade of the Seas Reemerges from Drydock