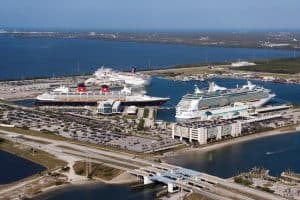 A deal was reached between Port Canaveral and Royal Caribbean to home-port at least one ship at the cruise port through 2015.

The agreement, which was reached in a staff meeting yesterday at Port Canaveral states, “The Agreement today contractually extends through December 31, 2015 the commitment of Royal Caribbean to home-port a vessel at Port Canaveral, Freedom-class or larger.”

Currently the 4,000-passenger Freedom of the Seas is home ported at Port Canaveral and operates alternating 7-night Eastern and Western Caribbean itineraries.

The Monarch of the Seas is also home-ported there and alternates 3/4-night Bahamas cruises, is contracted through April 2012. Royal Caribbean is expected to let Port Canaveral know this fall on what the plans are after April 2012 for the Monarch.

Port Canaveral has been seeing record breaking cruise passengers and broke ground last month on a new state of the art cruise terminal.

Hi, this may be of interest to you: Port Canaveral and Royal Caribbean reach deal to extend cruise ship relationship. This is the link: https://cruiseradio.net/port-canaveral-and-royal-caribbean-reach-deal-to-extend-cruise-ship-relationship/