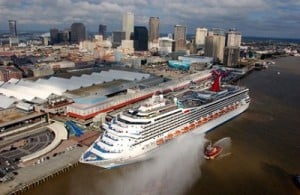 Carnival ship at the Port of New Orleans. (photo: Port of NOLA)

“New Orleans is a hugely popular cruise port and cruise lines are taking notice and investing larger and newer ships in their New Orleans itineraries,” said Gary LaGrange, Port President and CEO. “This year we will be knocking on the door of the 1-million-passenger mark.”