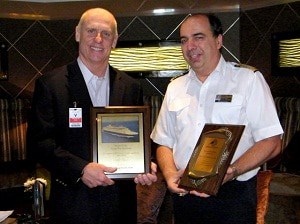 The port of Tampa recently celebrated 30 years as home port to Holland America Line. A ceremony took place on this past Sunday aboard the 1,259-guest ms Ryndan which a plaque exchange occured with the ship’s captain and a select group of port and tourism executives (photo right). The ms Ryndam is one of four Holland America Line cruise ships to call at the Port of Tampa since 1982.

Port Authority William “Hoe” Brown thanked Capt. Werner Timmers and presented him with a commemorative plaque and gift. On the port authority’s behalf, Brown then accepted a plaque from the captain. Holland America Line’s first full cruise year in Tampa, tallied in 1983, had a total passenger throughput of 35,153. Since its inception, the cruise line has hosted more than 1.2 million passengers in the Port of Tampa.

“We are extremely pleased to see this long-term commitment from Holland America Line in Tampa. They truly put us on the cruise industry map in 1982, and we look forward to the next thirty years of successful cruising from this outstanding cruise partner,” Paul Anderson, Tampa’s port director and chief executive, said.

The Port of Tampa is the largest economic engine in west and central Florida, generating nearly 100,000 jobs and some $8 billion in economic impact.