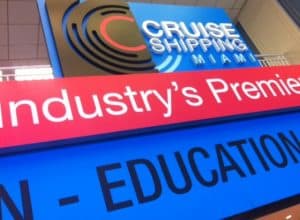 This morning at the annual Cruise Shipping Miami conference held at the Miami Beach Convention Center, cruise industry executives spoke at the State of the Industry address. Trends, current events, new builds, along with facts and figures of the current state of the cruise industry were the topic of discussion. It was evident that the cruise industry has grown decade after decade – 10 new builds in 1980’s, 40 in the 1990’s and 167 in the 2000’s – and 20 more additions in the next two years.

President and CEO of CLIA, Christine Duffy, showed that the cruise lines have invested $7.1 billion in new ships in the next few years. Also, the launch of CruiseForward.com, a website to get consumers engaged in cruising and sharing CLIA’s involvement around the world.

During the executive panel, a hot topic was Carnival Triumph, what happened and what the cruise line is doing to prevent this from happening again. CEO Gerry Cahill announced a four step plan for a fleet-wide review to ensure that a “Carnival Triumph situation” won’t happen again. Prevention, engine room redundancies, hotel facilities that run on generators and implementation were all a part of the plan.

Norwegian Cruise Lines CEO, Kevin Sheehan, made it clear that if the environment continues its course, it will outperform any other industry. Sheehan also mentioned that the upcoming 4,000-guest Norwegian Breakaway is going to change the market forever.

Royal Caribbean was also very complimentary on Singapore’s progress and willingness to work with the line and their expansive growth in Asia.

At the state of the industry close,  Royal Caribbean’s CEO Adam Goldstein was asked about details of the upcoming Quantum –class ships, his only response – coming soon.

Cruise Shipping Miami continues through the week in South Beach.

20 Things to Learn about Royal Princess