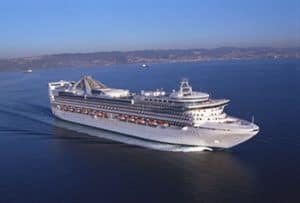 Princess Cruises’ blog, “Linked by the Sea” has chronicled its second series of five stories of people who made new connections on a cruise. The new tales include a romantic love story, a case of mistaken identity that led to new friends, and a group brought together by having the same name.

Each week the blog, found at LinkedByTheSea.com, will illustrate how a cruise not only offers a relaxing retreat from which to explore the world, but often includes the discovery of new friends that lead to meaningful or lifelong relationships. Both passengers and crew tell about people they connect with at sea.

Turndown Chocolates in Reverse – Passenger Vickie Bowne and her husband, Bernie, have found that treating the crew opens the doors to great friendships, in particular one with Captain’s Circle Host Peter John.

Six Bobs and Counting – Passengers Pamela Hayes and her husband, Bob, were surprised to find two other men named Bob at their dinner table aboard Sea Princess. They were even more surprised that they all clicked and now travel together with a group of “Bobs” that has grown to six.

Is that Simon Cowell? – Passenger Lyne Tremblay thought she saw Simon Cowell on a cruise, but instead met new friends Ray and Lisa, who have become frequent traveling companions.

Crazy, Lucky Love – Passenger Tracey Pettit tells a romantic story of how she met her future husband aboard Regal Princess, and knew immediately that she would marry him.

Blog readers are encouraged to share their own “Linked by the Sea” stories through the blog as well. Submissions to linkedbythesea.com/share-your-story will be considered for future blog posts.