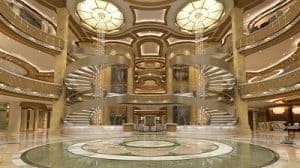 Princess Cruises released a video today that shows some design concepts that went into their upcoming Royal Princess. The video (below) gives a look at what guests can experience when Royal Princess debuts June 2013.

The video features Vice President of Interior Design Teresa Anderson and Coordinating Architect Giacomo Mortola, the video takes viewers through the ideas behind the new ship design, from the ethereal feel of the marble and glass spiral staircases in the atrium to the influence of Frank Lloyd Wright in the décor of the aft dining room.

For Anderson, Royal Princess’ design springs from the concept of ‘global chic.’ “I believe that’s what Princess Cruises is all about – taking influences from fashion, from art, from history… what you capture when you’re traveling the world.”

While for Mortola, light was an important element. “More than any other project I’ve worked on, on the new Royal Princess, I used light as a central component of my designs,” said Mortola. “The Chef’s Table Lumiere in the aft dining room is a great example of this. The table is surrounded by a curtain of fiber-optic lights which creates real drama – unlike any dining experience you’ve had.”