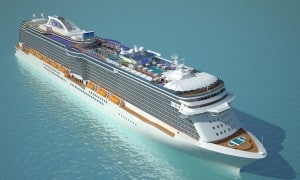 SANTA CLARITA, Calif. (March 2, 2012) – As time nears for bookings to open on Princess Cruises’ highly anticipated new ship, Royal Princess, the line is holding an unprecedented charity auction for a chance to secure a stateroom aboard the ship’s inaugural sailing on June 16, 2013. The auction, which opens on eBay today under the eBay Giving Works program, will enable one lucky bidder to become the very first passenger booked on the ship, while at the same time raising money to support worldwide charitable causes.

All proceeds from the eBay auction will go directly to the Princess Cruises Community Foundation, a 501(c)(3) charity, which supports causes around the globe.

The winning bidder will secure a coveted cruise for two on the maiden voyage – a seven-day, four-port Iberia sailing from Southampton to Barcelona with calls at Vigo, Lisbon, Gibraltar and Malaga. The lucky passengers will sail in a new class of accommodation debuting on Royal Princess, a deluxe balcony stateroom offering additional space, a sofa bed and enhanced amenities.

Bidding starts at just $1, and the 10-day auction will close with the highest bid winning the cruise on March 12, 2012. Anyone with an eBay account, regardless of location, may bid on the cruise.