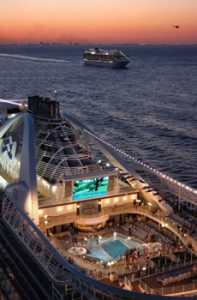 Princess Cruises has been honored by the Port of San Francisco with its annual “Cruise Ship Environmental Award” for the sixth year in a row. This award is given for outstanding records in air emissions reduction, advanced wastewater management, and recycling and disposal programs.

“We’re gratified that our environmental efforts are being recognized in San Francisco again, especially since we’ve been able to utilize our shore power technology at the port’s new facility,” said Jan Swartz, Princess Cruises executive vice president.  “We’re committed to doing our part to help ensure that pristine and beautiful ports like San Francisco stay that way.”

Since 2001, Princess has invested nearly $7 million in equipment alone to enable its vessels to connect to shore power.

Sea Princess is able to “plug in” at the Port of San Francisco since the port’s new shore power facility launched in 2010.  The cruise ship terminal enables Sea Princess, and other equipped vessels, to use power from the city’s grid instead of the engines to power the ship’s onboard services – reducing emissions when docked in San Francisco.  The port became the fourth in the world where Princess Cruises’ ships can take advantage of this innovative technology.

What is the cost to plug in? $4-$5,000/day for surplus hydroelectric power (compared with approx. $3,500/day for diesel fuel if engines were used while in port).

Sea Princess is based in San Francisco for the summer, cruising on 10-day roundtrip Alaska cruises.