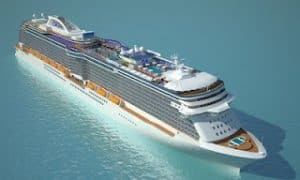 Princess Cruises new ship Royal Princess (right) is set to launch June 2013 and inviting guests to be a part of it, literally.

The line has launched a “1,000 Memories at Sea” contest inviting passengers to submit their best cruise vacation shots, which will be displayed on the walls of hallways between staterooms and in other locations around the ship. In addition, one lucky photographer will win a cruise for two, including airfare, on Royal Princess.

The “1,000 Memories at Sea” contest runs through March 31, 2012 and is open to entrants 21 years of age or older, residing in the United States, Canada (excluding Quebec), the United Kingdom, Australia and New Zealand.