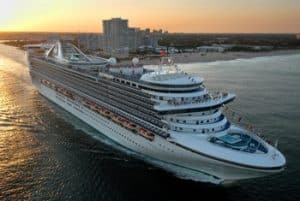 SANTA CLARITA, Calif. (November 14, 2011) – Each year passengers aboard Princess Cruises ships enjoy thousands of performances from guest entertainers – comedians, magicians, tribute bands and other specialty acts. But this April only one performer will be able to claim the first-ever title of “Entertainer of the Year.”

Passengers aboard Princess’ Entertainer of the Year cruise – Ruby Princess’ April 8, 2012 sailing to the Eastern Caribbean – will cast their ballots to help bestow the honor. And starting this month, Princess Facebook fans can also get into the act by helping to choose one of the five finalists.

“Because of the remarkable caliber of the more than 2,000 guest entertainers who perform on our ships, we’ve created this award to recognize the impressive level of talent we showcase at sea,” said Jan Swartz, Princess Cruises executive vice president. “And we want to give our passengers who enjoy these acts during their cruise a chance to help us select their favorite.” She added that among comedians alone, Princess presents 5,000 live comedy shows each year, so it will take an exceptional performer to capture the title.

To narrow down the field in advance of the cruise, the Princess Cruises entertainment department team will select four top finalists based on passenger surveys and onboard audience response. In addition, a “Facebook Favorite” will be selected by asking Princess’ Facebook fans to nominate their favorite act.

Selection of the finalists will be complete in January, at which time video clips of each act will be posted on Princess’ YouTube and Facebook pages so fans can see the entertainers who are up for the award.

Aboard the Entertainer of the Year cruise next April, passengers will be able to see live performances from each finalist and then cast their ballot for their favorite. The winner will be announced on the final night of the cruise at a special party.

“We hope many fans of our entertainers will join us on Ruby Princess for this special cruise because it will be a rare opportunity to see many of Princess’ top-rated performers together on one ship,” Swartz added.

The winner will receive a cash prize and select onboard perks, and will hold the title of “2011 Entertainer of the Year.”

A video introduction to the Entertainer of the Year competition is available on YouTube.