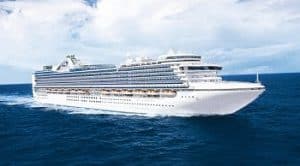 Princess Cruises’ first-ever cruise to support U.S. veterans will feature a number of special guests including former chairman of the Joint Chiefs of Staff, Admiral Michael Mullen (Ret.); retired senior officers from the Army, Navy and Air Force; an award-winning war correspondent; and other respected speakers, authors and panelists.

Princess President and CEO Alan Buckelew, a Vietnam veteran himself, will be on board to host the cruise. He will be joined by special guests Admiral Mullen, former Army Chief of Staff General George Casey (Ret.), former Air Force Chief of Staff General Norton Schwartz (Ret.), and former Chief of Naval Operations Admiral Gary Roughead (Ret.), who will each host military branch gatherings throughout the voyage. The senior officers’ wives, Deborah Mullen, Sheila Casey, Suzie Schwartz and Ellen Roughead will take part in a panel discussion centered on the lives of military families and the changing roles and challenges of spouses before, during and after deployment.

In addition, guest lecturers on the cruise will include:

The Western Caribbean cruise will sail November 5-9, 2013 roundtrip from Houston aboard Caribbean Princess, with a call at Progreso, Mexico. The four-day cruise will offer passengers the opportunity to honor those who have served in the military as well as active duty military personnel. In addition to the line-up of incredible military guests and speakers, there will be special performers, celebrities, unique topic panels and a military film festival. Princess will custom-design onboard activities such as a Stars and Stripes Sailaway, a military themed show, a Red, White and Blue Gala, game shows, trivia quizzes and more – to celebrate US veterans.