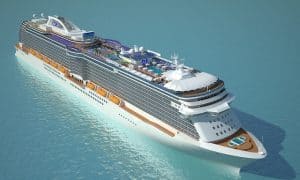 SANTA CLARITA, Calif. (February 14, 2012) – Princess Cruises today marked Valentine’s Day by unveiling the maiden season itineraries of its highly anticipated Royal Princess debuting in June 2013, as well as some additional features of the ship’s signature, and greatly expanded atrium, the social hub of the ship.

Preceding the ship’s inaugural program of 12-day Grand Mediterranean cruises between Barcelona and Venice beginning on June 23, Royal Princess will sail on her inaugural voyage, a seven-day Iberia cruise from Southampton to Barcelona departing June 16.

The Royal Princess maiden season cruises will open for sale on March 15, 2012. There will also be two three-day preview cruises sailing roundtrip from Southampton on June 10 and 13 that will be available for booking at a later date.

“It’s fitting that our new ship will cruise on our most popular Europe itinerary, the Grand Mediterranean,” said Jan Swartz, executive vice president for Princess Cruises. “And the shorter preview cruises prior to the Mediterranean season certainly offer a unique opportunity to sample the new Royal Princess experience our passengers are eagerly awaiting.”