Princess Cruises announced Friday that their new China-based ship, a sister ship to Royal Princess and Regal Princess, is to be named Majestic Princess.  It is currently under construction and will be completed in summer 2017.  Majestic Princess is Princess’ first vessel built specifically for Chinese guests, and will include a unique blend of international and Chinese features.

Majestic Princess will also feature a Chinese name on the hull, 盛世公主号 (Shèng Shì Gōng Zhǔ Haò) – an interpretation picked by Carnival Corporation’s China employees, which has the suggestive meaning of “Grand World” or “Grand Spirit.” 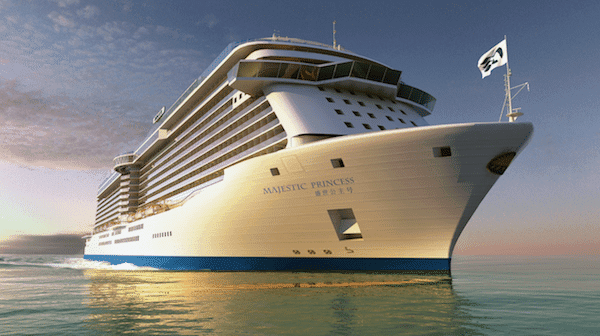 The ship will be 143,000 tons and is being built by Fincantieri Shipyard in Italy.  She will be home-ported in Shanghai and carry 3,560 guests for cruises to Korea and Japan.  It will feature Princess’ signature international flair and flavor, with cuisine inspired by places all around the globe; Italy, France, North and South America, and Asia.  Guests will enjoy a festival of dance, music, and crafts of exotic cultures, international entertainers, and Las Vegas-style production shows.

Other aspects of the Princess Class experience will be showcased onboard, with events like the World Leader’s Dinner and Traditional English Afternoon Tea.  The ship will also offer Princess’ signature Movies Under the Stars with the largest outdoor movie screen at sea, and the WaterColor Fantasy fountain and light show.