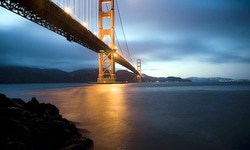 Princess Cruises announced this week that it will base 2,600-passenger Grand Princess in San Francisco year round, beginning in May 2013. The move marks the first time Princess has had a ship based in San Francisco.

“Princess ships have been cruising from San Francisco for more than 40 years, and we greatly appreciate the company’s longstanding partnership with our city,” said Monique Moyer, executive director of the Port of San Francisco. “

The extensively renovated Grand Princess will first offer a series of Alaska cruises during the summer months from the “City by the Bay,” followed by a schedule of Hawaiian Islands, Mexico and the California Coast sailings during the fall 2013 to spring 2014 season.

Last year the Grand Princess underwent the largest drydock in Princess Cruises history, adding a host of new features so that passengers will enjoy the same onboard experience as offered by the line’s other newer ships. We reported on the Grand Princess post-drydock earlier this year and were impressed with the improvements made on the ship.  (see other posts on this topic below)

“Our Bay Area passengers and travel agents have long been asking for more cruise options from San Francisco and our new year-round schedule with Grand Princess will now give them a great selection of itinerary choices, plus the benefit of sailing on a ship that offers our signature features and amenities,”said Jan Swartz, Princess Cruises executive vice president.

During last year’s drydock Grand Princess added a variety of passenger amenities, including a completely new Piazza atrium, several new eateries – including Alfredo’s Pizzeria and the Crown Grill – and the line’s first specialty tea lounge called Leaves. Also included in the renovation were a remodeled casino, boutiques and art gallery; enhancements to the Horizon Court, Lotus Spa, and wedding chapel; and the addition of Crooner’s Martini Lounge and a new nightclub, The One5.