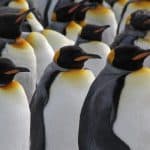 Quark Expeditions, one of the leaders in Antarctica cruises announced schedules for 2013/14 this past week.

For more information on these newly released sailings check out www.quarkexpeditions.com.