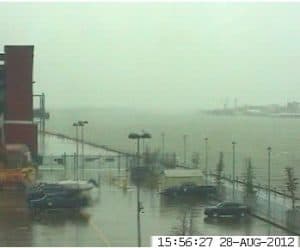 This email came in last weekend from a passenger who was sailing aboard Carnival Legend when the ship was diverted from its original port of Tampa to Port Canaveral, Florida because of Tropical Storm Isaac.  We turned the question over to CEO Dan Skilken of TripInsurance.com for the final answer. I wasn’t going to post this but figured if someone took the time to write in, there are others who probably want to know the same thing.

It’s a good tip to remember that travel insurance must be purchased before the storm is named.

Hey guys. You probably read over the weekend that our cruise ship was diverted to another port because of a tropical storm. We did not have travel insurance or purchase our air through the cruise line and regretting it. If we had purchased travel insurance, would the cost to cover airport changes have been covered? Tiffany Deering in Plano, Texas

A cruise ship is considered a common carrier by travel insurance companies.  If a common carrier has a delay or in ability to arrive in a port because of weather, this would be considered a travel delay or missed connection depending on the amount of time involved.  Normally a cruise ship would set up buses to get passengers from the airport to a new port, but if their plane does not arrive in time to catch the cruise ship arrangements, then travel insurance could cover the cost of a rental car or plane tickets to get them to the new port of call.

Cruising Through the Years