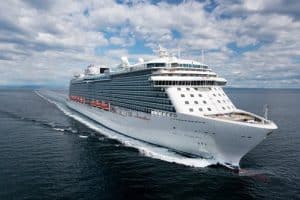 It’s almost time for Princess Cruises’ upcoming Regal Princess to make her grand debut. Regal Princess passed another major milestone as she completed her sea trials and it now in final preparations for the May 20 sailing.

The new cruise ship set out to sea from her construction dock at the Fincantieri shipyard in Monfalcone, Italy, and was put through her paces with a series of maneuvers to test her propulsion, steering and navigational equipment. After a successful five days of trials, the ship is now back in the shipyard for further exterior and interior finishing.

Regal Princess will sail a seven-night inaugural cruise from Venice, Italy, to Athens including stops in Corfu, Mykonos and an overnight call in Istanbul.

Regal Princess, a sister ship to Royal Princess, will offer guests a variety of enticing features, including a soaring atrium, the social hub of the ship; a dramatic over-water SeaWalk, a top-deck glass-bottomed walkway extending more than 28 feet beyond the edge of the vessel; plush private poolside cabanas; the Princess Live! television studio; a dedicated pastry shop; a special Chef’s Table Lumiere, a private dining experience that surrounds diners in a curtain of light; and balconies on all outside staterooms.

Carnival Freedom heads to Galveston in 2015