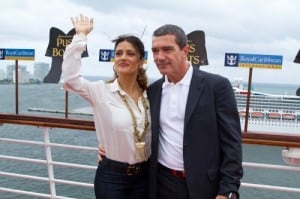 Salma Hayek and Antonio Banderas at the red carpet premiere of Puss in Boots.

On Sunday,  Royal Caribbean International and DreamWorks Animation held a red carpet event for the upcoming  film, Puss in Boots aboard the worlds largest cruise ship, Allure of the Seas.

It was held inside Allure’s 3D movie theater where Puss in Boots made its debut, joined by the stars of the film, Antonio Banderas and Salma Hayek, who provide voices to Puss in Boots and Kitty Soft Paws, respectively. Allure of the Seas welcomed this unique premiere and red-carpet experience as the kickoff stop to the Puss in Boots appearance tour journeying across the United States.