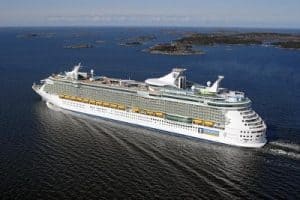 Liberty of the Seas. (photo: RCI)

Royal Caribbean International announced today that a total of nine ships will sail the European waters in 2013. Most recently announced was Legend of the Seas and Vision of the Seas.

So who’s going where?

Most all of the cruise ships will undergo Royal Caribbean’s Royal Advantage program, giving the ships Oasis-like features and heavily refurbished.