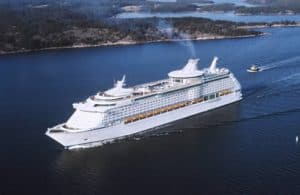 Adventure of the Seas. (photo: RCI)

Adventure of the Seas features an in-line skating track, an ice-skating rink, a rock-climbing wall, a boulevard of restaurants, boutiques and lounges, running through the center of the ship, extensive family facilities, and a host of restaurants from fine Italian dining to casual burger bars.

For a fifth season, Independence of the Seas will arrive early May after completing a scheduled dry dock.