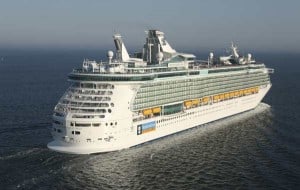 Royal Caribbean announced this morning that they’ll be repositioning their 3,634-passenger Independence of the Seas back in Port Everglades for the 2012-13 winter cruise season. This will put three Freedom-class vessels in Florida at that time with three different ports to chose from: Port Everglades, Port Canaveral, and Miami.

“We are looking forward to having all three Freedom-class ships sailing the Caribbean in winter 2012-13,” said Betsy O’Rourke, senior vice president of Marketing, Royal Caribbean International. “Independence of the Seas has helped solidify Royal Caribbean’s position as the most innovative cruise line in Europe, where she will continue to sail in the summer, and is now offering new Caribbean adventures for the ship’s devotees. The most innovative cruise ships along with exciting itineraries in one of the world’s most idyllic destinations, plus friendly and engaging Gold Anchor Service from every staff and crew, are all part of the Royal Advantage that we are delivering to guests from around world.”

Independence of the Seas will make her journey from Southampton, England to Port Everglades on November 22, 2012. She will remain in Port Everglades from December 2012 to March 2013 and will be operating Eastern and Western Caribbean cruises.

Independence of the Seas boasts 10 dining options, the FlowRider surf simulator, a full size boxing ring, an adults-only pool area, and whirlpools suspended 112 ft above the ocean. Currently the ship sails in the Mediterranean and Canary islands.

Be sure to sign up for our daily news alerts here.