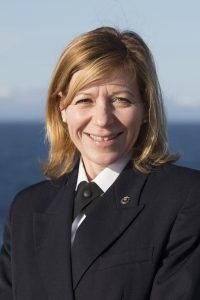 For the first time in its nearly 20-year history, a female captain is at the helm of a Silversea ship.

Ultra-luxury Silversea Cruises, which operates a fleet of six ships, has promoted Margrith Ettlin to the position of captain. A Swiss national with extensive maritime experience in remote regions, including the Arctic and Antarctica, Captain Ettlin assumed control of the 132-guest expedition ship Silver Explorer on August 7 in Reykjavik. Her first tour of duty as captain will extend into October.

“We’re very pleased and proud to extend this promotion to Captain Ettlin,” said Christian Sauleau, Silversea’s executive vice president of fleet operations. “Although we’re not the first cruise company to have a female captain, we hope Captain Ettlin’s achievement will inspire other women to pursue careers at sea.”

Celebrity Cruises, There’s An App For That!