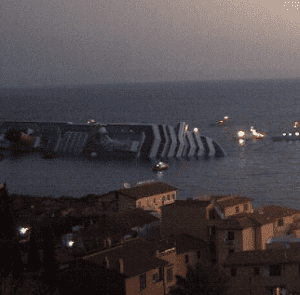 Costa Concordia lay on her side, starboard side down off Italy. (photo: Isola del Giglio webcam)

HOLLYWOOD, Fla. (March 9, 2012)  A total of six working plans to remove the hull of Costa Concordia were received by the deadline of March 3. Of the 10 world-leading salvage companies invited to tender for the contract, three decided not to bid due to previous commitments and two have joined forces to present a joint project.

An update on the tender process was given during a meeting in Rome March 6 with Pier Luigi Foschi, chairman and CEO of Costa Crociere S.p.A., and Prefetto Franco Gabrielli, the head of the Civil Protection Department and managing commissioner for the Costa Concordia shipwreck.

The six plans involve different approaches and techniques. However, they all share a focus on ensuring the least possible environmental impact and protecting tourism and business activities on the Island of Giglio with maximum safety.

Given the complexity and extraordinary nature of the operation, the projects vary in duration, and estimates of 10 to 12 months, including a safety margin, have been presented.

The selection process will respect timing estimates. Technical assessments of the six plans are already under way and a short list will be drawn up by mid-month, from which the best plan will be selected, with the final decision made public in late March or early April.

Costa Allegra to be sold or scrapped