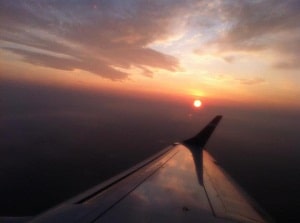 Flying these days certainly isn’t fun, but unless we want to spend countless hours in a car or days on a ship, it’s kind of necessary.

1. Be prepared for TSA

Everyone knows and is familiar with the TSA regulations these days that involve removing laptops, shoes and taking everything out to your pockets, right? To some people this is still an alien concept. Okay, if someone hasn’t flown in a while, then I can cut him or her some slack, but when you proudly display your US Airways silver status on your luggage, come on. You’ve had to fly at least 30 segments of 25,000-miles in a year to get that; you know what you’re doing. That also involves having your boarding pass and identification out approaching the TSA stand.

2. Don’t storm the gate when boarding

This is one I never understand. Everyone has a seat issued on the plane (except Southwest and they still line you up) so there’s no reason to storm the gate agent when she says boarding will start soon. Usually the people jockeying for space have luggage that’s way too big to put in an overhead bin and just slow everyone down. I always wait to board the flight until very last because I travel with a backpack that will always go under the seat in front of me.

3. Flight attendants are for safety

Flight attendants are there to make sure your butt is safe when the plane is taking off, in flight and landing. Your comfort isn’t always a priority when safety is involved. The other day I was on a flight that offered complimentary liquor. The guy kept pushing his call button just to order more booze. He was talking down to the flight attendant like she was his indentured servant.

If you have to run to the bathroom five minutes after you eat or drink what you were served, maybe, just possibly consider waiting ten minutes before you eat or drink. On my flight from Zurich to Barcelona (1-hr 50-minute flight) this lady ate her meal and decided she had to go to the bathroom immediately after she ate it. She got nowhere fast because a couple rows back they were still serving other passengers, making their way aft.

When disembarking the aircraft, we typically go from row to row, working forward to the rear. With the exception of a tight connection, it should always flow that way. If you have a tight connection you need to tell the flight attendant so he/she can advise passengers to stay seated until you get off the plane.

If you order a drink, food or open something you bring on the plane, throw it away. I’ve recently seen people throw stuff on the ground; kick cans under the seat in front of them and even put crumbs in the seat back pockets in front of them. Planes don’t get deep cleaned until they terminate at night so you’re just passing down your crap to the next passengers that board the plane.

Sometimes I think there should be an etiquette test that every person who wants to fly must take. It would eliminate the rude folks aboard and make the flying experience easier for everyone. Or maybe I’m just flying too much and people are getting on my nerves a lot easier. Either way, you have my thoughts.

Do you have any rules of flying?

5 Ways to Get Jet Lag

5 Tips to Survive an Airport Layover