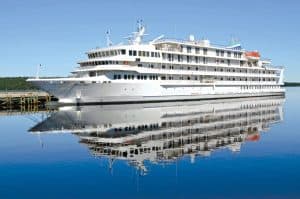 One of the newest upcoming river ships to hit the United States waterways, Pearl Mist, announced her 2014 schedule last week, kicking off June 2014.

The inaugural cruise departs June 28, 2014 and is an 11-night sailing from Baltimore to Halifax, Nova Scotia. A total of 17 cruises are planned for the 2014 season, beginning in June and ending in November

With their similar style of cruising, ports, enrichment and excursions the Pearl Mist will be on the same playing field as American Cruise Lines and Un-Cruise Adventures.

Small ship cruising as become a popular way of travel over the past few years.