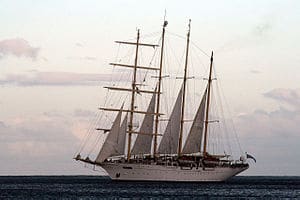 Sailing ship cruise company Star Clippers announced at a press conference on Saturday of their plans to sail limited cruises in Cuba in 2014, aboard the 170-passenger Star Flyer.

“Star Clippers is headquartered in Europe and caters to an international clientele,” said Mikael Krafft, owner and president of Star Clippers Inc. “Each season we try to diversify our itineraries and offer something new and exciting. The small islands that we’re calling at in Cuba are an ideal match for the Star Clippers product.”

It sounds cool but not so fast! Under United States law, Star Clippers Americas cannot sell or market the line’s Cuba cruises. It is a violation of U.S. law for American citizens or residents to travel to Cuba without authorization.

So United States citizens can’t purchase these sailings through a travel agent or the Miami-based North American sales office.

Queen of the Mississippi officially christened in Nashville

Hi, this may be of interest to you: Star Clippers sails to Cuba in 2014. This is the link: https://cruiseradio.net/star-clippers-sails-to-cuba-in-2014/