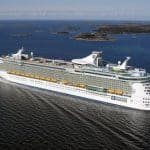 A recent survey conducted by Harris Interactive shows that the American population still plans to cruise in spite of the events that led to the sinking of Costa Concordia this past January.

“Among those travelers that have cruised in the past or plan to in the future, two-thirds (65%) shared that they are no more or less likely to cruise again following the accident,” according the survey. In fact, 12% even reported that they are more likely to cruise despite the event in Italy. In total, nearly one-quarter of U.S. adults (23%) plan to take a cruise in the next five years.

The survey also showed that two in five Americans will continue to travel regardless of the economy and 47% plan to spend more than $1,000 on their vacation in 2012.

The Harris Interactive poll was taken this past May with 2,634 adults.