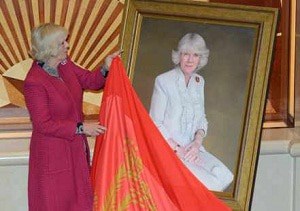 HRH The Duchess of Cornwall unveils a portrait of herself aboard the Cunard ship Queen Victoria in Southampton.

Her Royal Highness The Duchess of Cornwall came face-to-face with her own image last week in Southampton, England, when she unveiled a specially-commissioned portrait of herself on board Queen Victoria, the Cunard liner named by The Duchess in December 2007.  Her Royal Highness made a special return visit to take part in celebrations marking the ship’s fifth anniversary.

This new portrait of The Duchess is in keeping with the Cunard tradition of commissioning commemorative sculptures or portraits for display on board each ship named by a member of the Royal Family.  The three-quarter length artwork shows The Duchess seated and dressed in a cream suit with ruffle detailing.  It replaces a photograph of The Duchess which she signed just before naming Queen Victoria, and will be given a prominent place in the ship’s Grand Lobby.