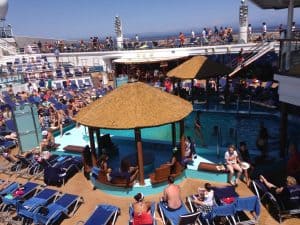 A sea day says a lot about a ship. It’s a testament to see if a cruise ship was designed with passenger space in mind or just trying to stack a bunch of venues on the ship and see how it works out. Carnival definitely had the guest in mind on the Carnival Sunshine project.

People were jockeying for space on the lido deck around noon but the early bird gets the worm on this. During the morning people started migrating outside around 9:30, and by 11 it was packed. We didn’t see any areas of congestion around the lido deck and the flow seemed to be working smoothly and no real gridlock.

There are also chairs that wrap around the port and starboard side of the ship as well as the upper decks, so if you want to spend the day sunning, get out early.

Talk about a popular area! I knew serenity was going to be big but I didn’t know this big. This was a serene adults-only retreat with little or no noise the further forward you went.

If you’re by the waterfall pool on serenity you’ll definitely be able to hear the DJ on the lido deck, but the more forward you move, all you hear is the wind blowing across the deck. Seriously. This was shocking to me because you can’t hear the lido from as far forward as you can get. Carnival really hit a home-run on this feature.

Serenity area is proving to be popular both at day time and late-night movie watching or relaxing. 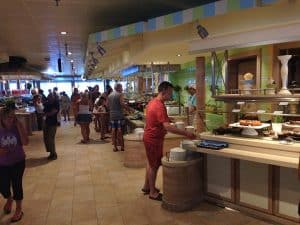 For being a sea day and over 3,000 people on the ship, you really couldn’t tell when it came to dining venues. There is pretty much food all over the ship, and plenty to go around.

I started up top on the lido deck and worked my way down to ocean plaza. There wasn’t much of a crowd for Jiji’s Asian Kitchen, the Lido deck marketplace was busy but comfortable, Guy’s Burger Joint had a constant flow with no lines at all and Blue Iguana Cantina was pumping out the tacos and burritos. There was a line in the burrito line for Blue Iguana but I never saw it get more than 10 deep at a time.

On deck five there was a mini buffet set up in Ocean Plaza at the Taste Bar and folks were putting it to good use. Again, not crowded at all. Shake Spot and Java coffee were also hopping.

The sea day buffet was in the main dining room at 11 and seemed to turn the tables pretty fast.

There is no shortage of entertainment for kids and adults on Carnival Sunshine and sea days are no exception. I’m not sure of the exact numbers that the WaterWorks waterpark and go through an hour but it was a paradise for kids of all ages. The ropes course, poolside DJ, Hasbro, The Game Show; towel making classes and the Red Frog Pub had people hopping all day.

All in all Carnival Sunshine withstood our first Fun Day at Sea. When it comes to adding venues to spread the guests out on a sea day the folks at Carnival really knew what they were doing when planning this ship.