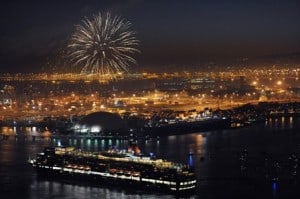 Amidst fireworks and much fanfare yesterday, Cunard Line’s Queen Elizabeth met Queen Mary for an historic Cunard Royal Rendezvous.  Cunarders and maritime enthusiasts alike gathered along the shores of Long Beach Harbour and more than two thousand people were aboard Queen Mary for a celebration that began with a series of whistle salutes between the two ships.  Joining these maritime icons high above was the famed Goodyear blimp, the Spirit of America.

Spectators were treated to a commemorative fireworks show, which lit up the skies above the harbour during the first-time meeting between the two ships.  In addition, a narrative of the ships’ histories was simulcast by Everette Hoard, commodore of Queen Mary, who was speaking from the Bridge of Queen Elizabeth and was also heard by guests on Queen Mary.  Queen Elizabeth then departed on her 18-day Panama Canal Discovery voyage.

This Royal Rendezvous marks Queen Mary’s first meeting with a Queen Elizabeth since 1967 when Queen Mary, during her final Transatlantic Crossing in Cunard service, passed by the original Queen Elizabeth.

During Cunard’s legendary history, the iconic Queen Mary epitomized the Golden Age of Ocean Travel and served as a Cunard liner for more than 30 years.  She also served as a troopship during World War II and a British Royal Mail Ship.  Queen Mary’s influence lives on today, serving as interior design inspiration for the modern Cunard fleet – the youngest at sea – and continues to be a popular destination for maritime enthusiasts.

Queen Mary retired from service in 1967 and is permanently docked in Long Beach, Calif. as a hotel, museum and tourist attraction.