United Airlines today unveiled its new Boeing 787 Dreamliner, which will revolutionize the flying experience for United customers and crews while delivering unprecedented operating efficiency, comfort and lower emissions. The airline showcased its first 787, fresh out of the paint hangar at Boeing’s Everett, Wash., facility. United is the North American launch customer for the Dreamliner, and expects to take delivery of its first 787 in September.  The airline has firm orders for 50 787s, for delivery by 2019. 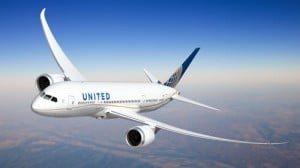 Primarily built with composite materials, the 787 has 30 percent more range and uses approximately 20 percent less fuel than similarly-sized aircraft, while reducing emissions and noise during takeoffs and landings. With these advantages, the 787 will open up new non-stop destinations that customers would not be able to otherwise reach on United, such as the recently-announced Denver-to-Tokyo service that starts next spring.

The aircraft cabin is configured with 36 seats in United BusinessFirst, 72 seats in United Economy Plus and 111 seats in United Economy. Customers will be more comfortable with improved lighting, bigger windows, larger overhead bins, lower cabin altitude and enhanced ventilation systems, among other features. The 787’s in-flight entertainment system features an all-new design that offers more intuitive browsing and more filtering options, giving customers the option of searching for programs by language.

United’s unveiling provided the first look at the aircraft’s interior and customized livery that is exclusive to the fleet, featuring a gold line that wraps the fuselage and swoops from nose to tail. The livery is inspired by the trademark swoop painted on each of Boeing’s aircraft and is being adopted for the United 787 in a tribute to the two companies’ long history of working together.