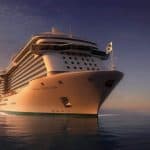 Royal Princess becomes Princess’ largest ship ever to sail Canada & New England when it offers these cruises for the first time in fall 2014. With four departures from New York’s Brooklyn Cruise Terminal in September and October, the ship will take passengers on a seven-day itinerary to the New England ports of Boston, Bar Harbor and Newport and the Atlantic Canadian ports of Halifax and Saint John.

Royal Princess will joins Royal Caribbean’s 2014 new build, Quantum of the Seas (Bayonne, New Jersey) and Norwegian Cruise Line’s brand new Norwegian Breakaway  (Manhattan Cruise Terminal), who will both be in the area next fall.