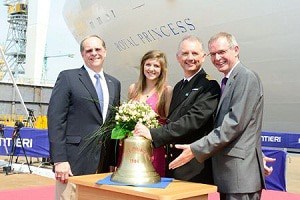 Princess Cruises newest cruise ship Royal Princess completed another milestone on Thursday as she was floated out of her building dock in Fincantieri shipyard in Italy.

The two-day float-out process involves slowly letting water into the building dock until the ship floats. The ship is then moved to the outfitting dock where final construction, interior outfitting and eventually sea-trials will take place.