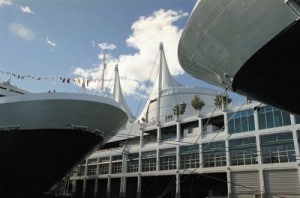 The 2012 cruise season also marks the beginning of the third full year of the award-winning shore power installation at Canada Place, the first of its kind in Canada. Shore power-equipped cruise ships can plug in and shut off their engines while docked to reduce air emissions. In 2012, nearly 40 per cent of all cruise calls will be shore power enabled.

During the 2012 Vancouver-Alaska cruise season, Port Metro Vancouver is pleased to welcome back the Princess Cruise Line’s Sapphire Princess, which will return to homeport.

“We’re delighted to make our summer return to Vancouver, and look forward to a successful season with 47 turnarounds in this world class port,” said Jan Swartz, executive vice president of Princess Cruises.