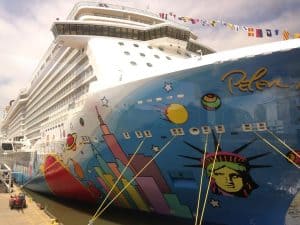 A crewmember aboard the Norwegian Breakaway contacted Coast Guard 5th District watchstanders at approximately 5 p.m. Monday reporting a woman suffered a heart attack and was in need of assistance.

The watchstanders, after consulting with the district’s flight surgeon and ship’s doctor, requested the cruise ship to alter course toward Elizabeth City, N.C., in order to be in range of a Coast Guard helicopter crew.

When the Jayhawk crew arrived on scene, they hoisted the woman and a ship’s nurse into the helicopter and took them to Sentara Norfolk General Hospital in Norfolk.