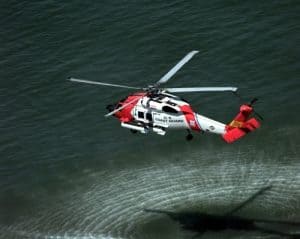 The Jayhawk crew arrived on scene at approximately 12:15 a.m. Tuesday, hoisted the woman, her husband and a nurse from the cruise ship into the helicopter and took them to Sentara Norfolk General Hospital.

“Coordination between the command centers and the cruise ship was great,” said Lt. Greg Dahl, the Jayhawk aircraft commander from Air Station Elizabeth City. “Anytime you hoist at night, it is more challenging, but my crew did a great job working with the cruise ship personnel to make this medevac successful. We spend a lot of time training and it’s nice to be able to help someone else by putting this training to use.”

Oceania Cruises Changes Up Alaska for 2013