They come in all shapes, ages, and sizes – Most people can’t stand them, those dreaded deck chair hogs. 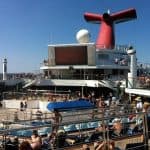 On July 30 Carnival Cruise Lines implemented a system on the Carnival Breeze with an attempt to stamp them out.

Under the new policy guests are allowed forty minutes to leave their deck chair unattended. The first site of a deck chair being empty, it gets a sticker and is on the clock.

After forty minutes – the belongings in the deck chair are taken to the towel station located on mid-ship.

To make sure everyone is aware of this new policy, its being broadcast on the PA, on the in-cabin televisions as well as on the sea side theater jumbotron. Once this proves successful it will be implanted fleet wide. (omit)