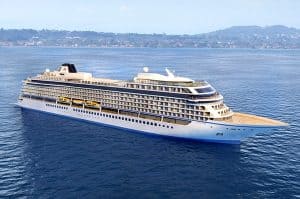 Until last night we knew very little about Viking River Cruises navigating into the waters of ocean cruising. We knew they were dabbling in the market of ocean cruising but it was very vague. At an event in Los Angeles, Viking River Cruises announced their new line Viking Ocean Cruises, the first ocean-going line in nearly a decade. The new line will introduce two brand new ships in May 2015 and 2016, with an option for four more.

The first ship, Viking Star (photo right), will be built at Fincantieri shipyard in Venice, Italy. The steel cutting ceremony for Viking Star will be held in June and the first cruise is scheduled for May 2015 in Northern Europe.

The new 928-guest ship on order will tout all veranda suites, three-deck atrium, two-deck lounge above the bridge, multiple inside and open air dining options, piano lounge, onboard cooking school and a theater for nightly entertainment.