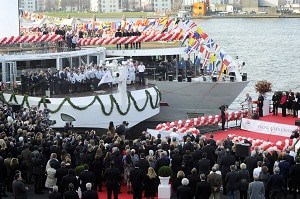 Beating a record that only they held, Viking River Cruises christened four new longships on Wednesday afternoon. The christening of the four new Viking Longships represents the first time in modern history that four cruise ships have been christened at once, with Viking Odin and Viking Idun christened in Amsterdam and Viking Njord and Viking Freya christened via satellite from the Neptun shipyard in Germany.

The ceremony concluded with an onboard dinner and maiden voyage cruise around the Amsterdam harbor.