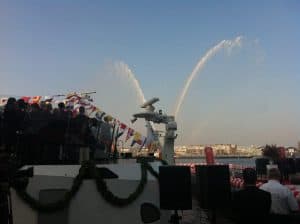 Today was the big day. We started by eating breakfast and getting off the ship to walk Amsterdam some more. They city is very well laid out and if very walkable (and cheaper than a cab). The girls went nuts in the shopping venue while I went to Burger King (how international of me, right?). I’m not a huge breakfast person so it had nothing to do with the food onboard. There was plenty in the dining venue and it was sit down/buffet type.

We had to be back at the ship by 3p to catch the christening (to my body it was still 10a because of the time zone). The christening of the four ships was a neat set up as they went via satellite to the shipyard in Germany for two of the vessels. The four godmothers spoke at the christening :

Rebecca Eaton, executive producer of the PBS series “Masterpiece,” which includes the hit show “Downton Abbey,” and Joanna Lumley, the British actress famous for her role as “Patsy Stone” on “Absolutely Fabulous,” joined the celebration as the ceremonial “godmothers” for the Viking Freya and Viking Odin. Renowned Harvard physicist Dr. Lisa Randall and Viking’s most traveled passenger, Gail Wiswedel, served as godmothers for Viking Idun and Viking Njord.

The christening event was topped off with fireworks and a fire vessel in the harbor shooting water in the air. It was a pretty cool display. What struck me was how they christened two ships via satellite from the ship yard in Germany, really pushing technology to the limits and it worked. 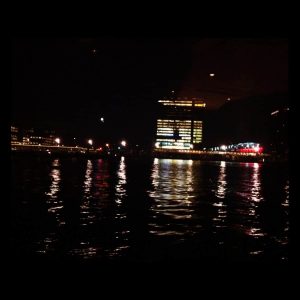 Dinner cruise after the christening aboard Viking Odin.

After the dinner cruise we did a dinner cruise for the evening in the dining room where the ship went a couple miles up the river, turned around, and came the other way. I was fortunate to sit with some producers at CBS and the marketing executive from Viking River Cruises. It was an interesting table. We had a six course meal with salad, lobster, veggies, desserts, and Viking liquor.

After a couple of hours the ship docked again and we went out into Amsterdam to explore some more, this time by cab. Since there’s no real entertainment venues on board, you have to venture off the ship if you want to get into some type of trouble. 🙂

Princess Cruises to enter Japanese market in 2013 with Sun Princess